“Vulnerability modeling is not foolproof. Emergency managers need to experiment with different models and understand their simplifying assumptions, which usually ignore the influence of terrain on toxic clouds of heavy gasses like chlorine and phosgene. They should also be wary of what the models might not tell them”—such as changes in atmosphere and the effects of terrain and of local winds (107).  Some chemicals will react with atmospheric moisture to produce even deadlier chemicals with a greater toxic reach than those initially released. 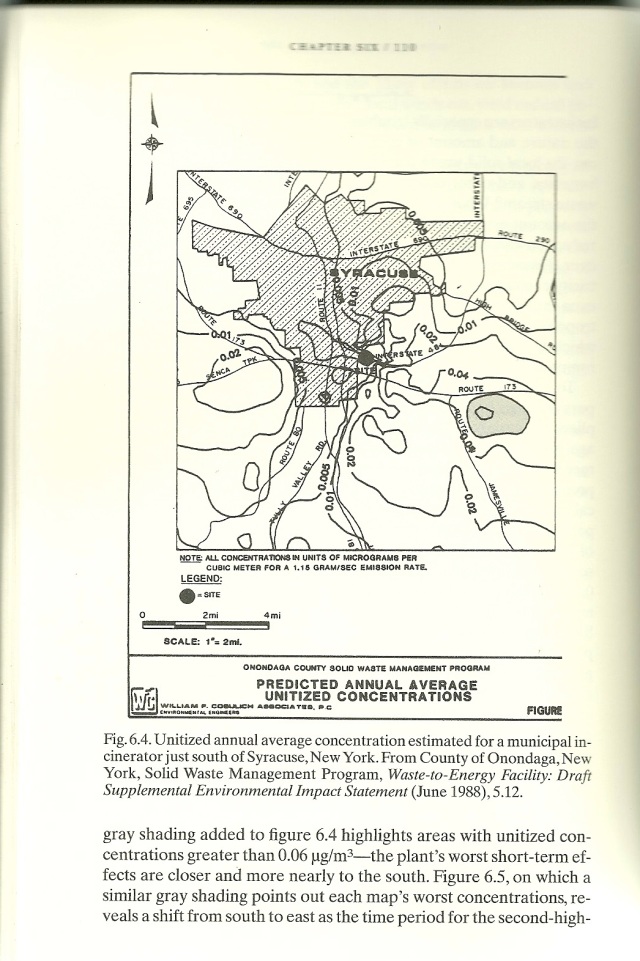 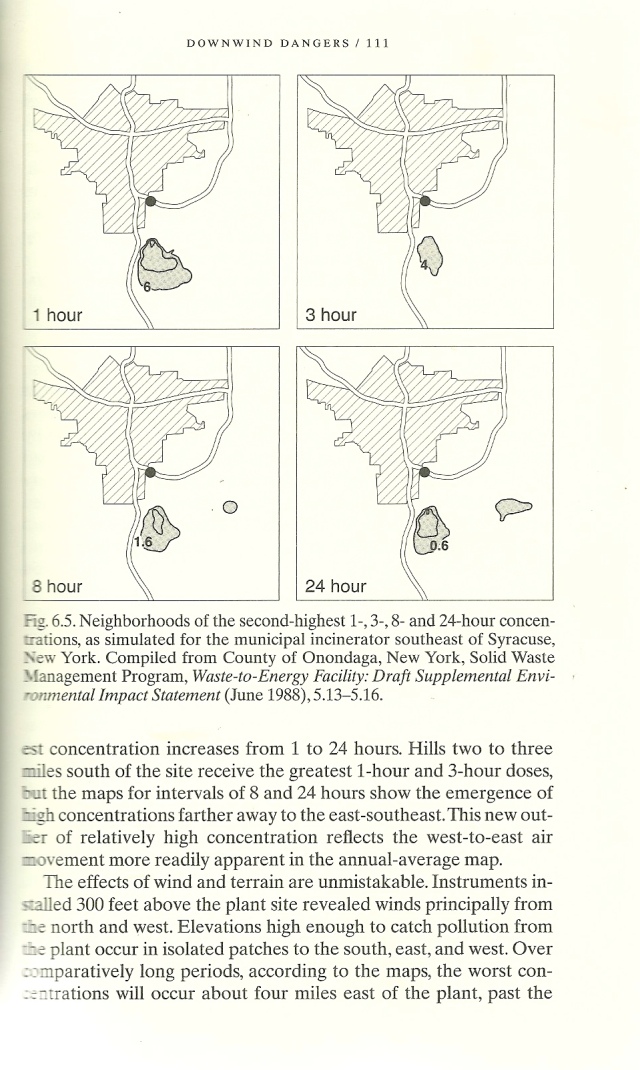 Monmonier gives us an example Plume Mapping situation where, “The effects of wind and terrain are unmistakable. Instruments installed 300 feet above the plant site revealed winds principally from the north and west. Elevations high enough to catch pollution from the plant occur in isolated patches to the south, east, and west. Over comparatively long periods, according to the maps, the worst concentrations will occur about four miles east of the plant, past the county prison in a hilly area of the large lots with expensive homes, many occupied by affluent physicians, a few of whom have become vocal skeptics of the plant. For short intervals, the worst concentrations will affect the lower, slightly closer hills south of the plant. But in no case, the maps declare, would the incinerator pose a threat to health. Moreover, the isolines promise an inconsequential added impact in the more heavily populated, low-lying city and suburban neighborhoods north and west of the plant—areas threatened far more by emissions from cars, trucks, and nearby factories.

Even Gaussian plume models have their issues: 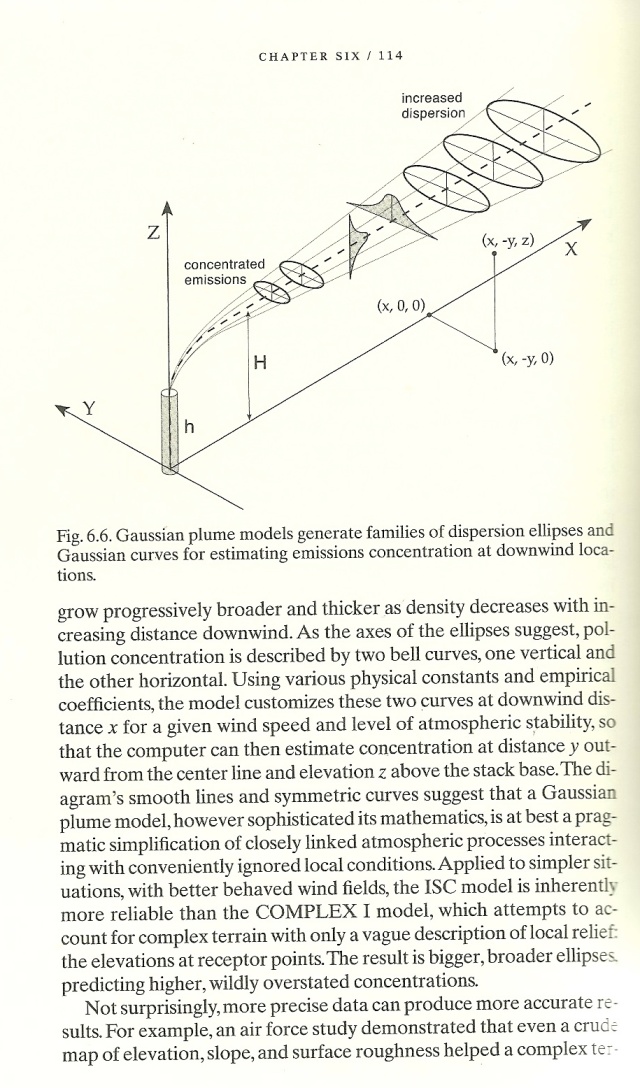 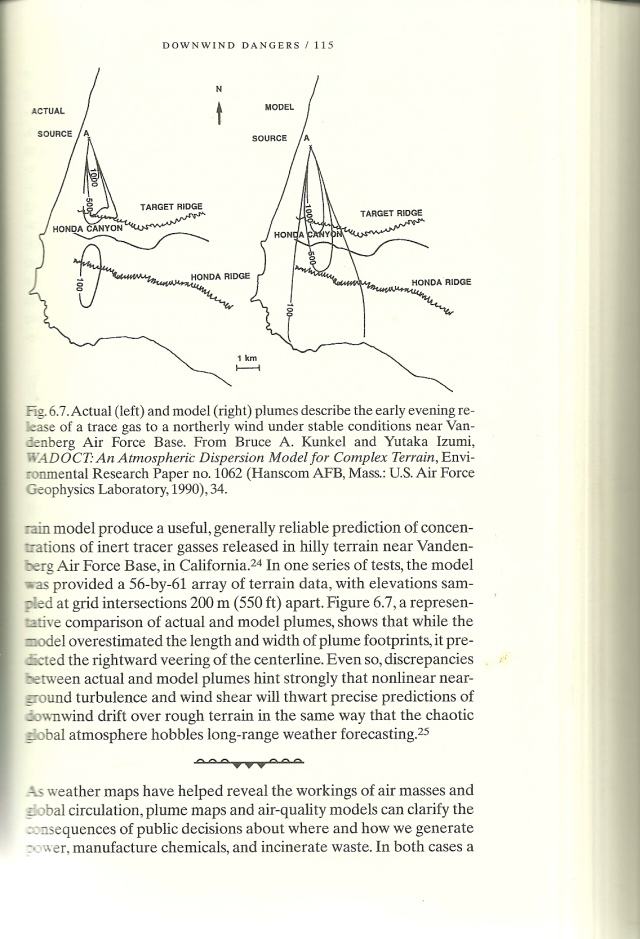 …coherent series of cartographic images offers invaluable insights to process and possibilities. Weather, of course acts as its own mapping engine, generating a continual stream of informative graphics. Regulatory decisions, by contrast, must rely on the eagerness of engineers, public officials, and concerned citizens to consider numerous designs and locations and thereby use air-dispersion modeling as an exploratory tool, not just as a means of conjuring up a few maps to appease clean-air statues. However imperfect, air-dispersion modeling can be a highly effective tool (and this is always a big if) the user understands how to use it and how well it performs. Atmospheric scientists need not only to develop more sophisticated models but also to improve their methods for both assessing and communitcating a model’s expected performance. After all, a flawed forecast based on a poorly understood environmental-impact or emergency-response model can have consequences far more tragic than an inaccurate five-day weather outlook.” (115-116).

1 Response to Issues to Consider